This post is part of a series we are doing for our local community with focus on Obstetric Violence at Abbotsford Regional Hospital. Some of the responses were given privately in direct message and some were posted in the comments thread of a post calling for stories. Last names have been protected and permission was granted to use first names or initials prior to posting. The image shown below is from Birth Monopoly and depicts the degrees and levels that define Obstetric Violence.

On Friday, March 6, 2020 a doula got in touch with me after one of the conference calls/Zoom Meetings I have been attending as a way to learn what is going on in the birth community and make connections with birth workers and birth enthusiasts. She asked me to collect stories from people in my community who had experienced obstetric violence at Abbotsford Regional Hospital.

It’s no secret that Fraser Health doesn’t like me, and the truth is that if they don’t like me it’s because I’m not letting them intimidate me. I can say what I like, as long as what I am saying is the truth. And it is. Everything I am saying is based in fact and echoed by many people in the birth community who are AFRAID to come forward. I will not expose them, but I will say that it’s a LOT of people who are afraid.

I also will not expose the clients who were traumatized by the system or on a lesser scale, felt they were mistreated or disrespected. Obstetric violence comes in all forms, and you can see that by Birth Monopoly’s hierarchical chart. It is happening everywhere, not just at ARH, and not just in Fraser Health. I intend to share EVERY STORY that comes to me, protecting the client whose story it is in the process.

I have received criticism from a few people for focusing on these “negative” stories instead of balancing out with positive ones. To that criticism I will point out that this is OUR #MeToo.

I refuse to diminish the stories of mothers and birthing people who come forward by including a “nice” story in the same post. That would be the equivalent of what Brock Turner’s asshole family and friends did when his victim came forward. Just because it didn’t happen to YOU does not mean it didn’t happen to many, many other people. So please sit down and listen, or please leave this space. But these stories WILL be told, because exposing a violation of human rights is how we END it. Consider already how there is pushback to #MeToo, but those voices are being drowned out now by the huge echo of stories that many women were afraid to speak about for far too long.

I put up a post asking for stories, thinking I would get a handful, and the response has been OVERWHELMING. Messages flood my inboxes, my comments threads, and I am trying my best to keep track of them all while also trying to recover from a nasty cold virus, so if I haven’t posted your story yet please be patient. I have a long list to go through, and it grows every day. Additionally, if you have a story to tell you can message me on my Facebook page or email EmpoweringMomsCanada@gmail.com.

This is one story of MANY that are from people who experienced obstetric violence. The experience, feelings, and conclusions reached by this individual are theirs and therefore not up for criticism. There is no “other side to the story” in this case, because there is NO EXCUSE FOR OBSTETRIC VIOLENCE just as there is no excuse for a man to beat his partner or rape someone. I don’t care if someone was overwhelmed, overtired, or “just following orders”. That doesn’t excuse what happened. If there is minimizing of the issue in which a mother/birthing person was wronged after they come forward (and so many people DON’T come forward) then that is a problem. If there is justification for what they did, that is a problem. “I’m sorry, I screwed up, I was wrong and will make an effort not to ever do it again” does NOT include any excuses, justifications, or words of apology where you know there will be no meaningful actions to change. Passing the buck will NOT fly anymore. Some information has been edited to protect the person sharing. This particular story was shared as a private conversation with me in a direct message. I have done my best to capture her story accurately.

Zoe reached out to share her story through a comment on my post. I promptly messaged her on that Sunday, March 8th and then patiently waited for her to see it and respond. I was in no rush; I know that it can take a while to compose one’s story and being that this topic is about birth, Zoe is a mother and therefore I suspected she might be busy. Zoe then reached out to me a few days later, sharing more of her story. Her baby was transverse, which had been causing her severe discomfort and pain for months, but no one in her care team had detected this. Eventually, seeing that she would get no help where she was, she transferred her care. This is her story:

“So I was in pain for over a month. Every time I would go to the bathroom I would scream (and it wasn’t a UTI). Logic says something is wrong. I would go in and out of the hospital and be told “everything is fine. Do you want some drugs for the pain?” They kept pushing morphine and fentanyl on me, even though I denied it every time, because I wanted to have as natural of a birth as possible.”

“Fast forward to April 12th, 2017. After months of complaining of being in pain and begging to be induced at 36 weeks, I was FINALLY in labour! [I} went to the hospital at 9am. They checked me and said I was dilated, but not a lot. So they left me and said they would check on me in a few hours. They checked on me a few hours later and said I only progressed 1cm. They gave me 2 options…go home and come back later that night because they had NO BEDS (which I had been told NUMEROUS different times. This was one of the main reasons they wouldn’t induce me, because every time I would ask they would say they had no beds) OR [I could] be transferred to a different hospital. Now, I was in so much pain that of course I just wanted to be transferred. So I was transferred to Chilliwack Hospital where they actually listened to my concerns.”

“The nurses there were incredible! I was labouring in the shower for 4 hours with absolutely no progression. The nurse decided to check me and knew right away something was wrong, and rushed the doctor over. How is it that a new nurse at a new hospital could find something wrong right away, but my nurses at [ARH] couldn’t? Well, my baby ended up being sideways, and my hips weren’t separating. I had to have an emergency c-section or lrisk losing my child, or him having extreme brain damage. At this point he already had a decent sized indent in his head from my hips hitting [it] every contraction.” 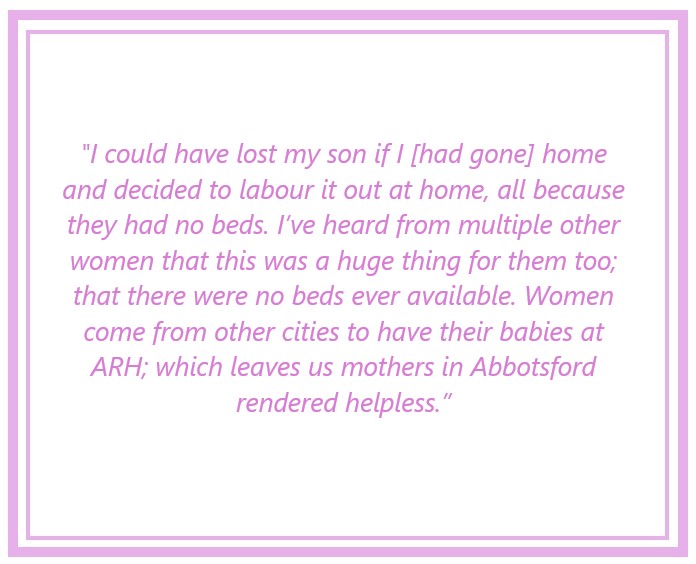 “I’m so happy I was transferred, but so disappointed that ARH never once listened to my concerns, offered an ultrasound to double check [that] Baby was in the right position, or could tell from checking me. I could have lost my son if I [had gone] home and decided to labour it out at home, all because they had no beds. I’ve heard from multiple other women that this was a huge thing for them too; that there were no beds ever available. Women come from other cities to have their babies at ARH; which leaves us mothers in Abbotsford rendered helpless.”

After reading Zoe’s story I expressed my sympathy to her that her concerns had been dismissed. I, too, wonder why the nurses and doctors at ARH hadn’t taken her pain seriously, thoughI am also well aware that there is a bias in women’s healthcare where women’s pain is often not believed to be as severe as it is. Nonetheless, that attitude needs to stop NOW and care providers need to LISTEN when their clients are telling them that something is very wrong. Thankfully, Zoe was able to transfer her care to Chilliwack and received more respectful care. The transverse position of her baby was finally noticed and she was given the emergency cesarean she needed.

As for the “no beds” issue, I can attest to this myself, personally. In May 2013 there were also “no beds” when I, having talked out of a desired home birth (that could have gone off without any issues and would have saved a bed for someone else who actually needed it), arrived at the hospital at 10am. I overheard one of the nurses from behind the curtain saying that “if [I] went fast, [I] was delivering in triage”. My labour slowed down after that, I’m sure it was psychological as my births are very much tied to my own emotional state. Ironically after getting a room, having my birth ALMOST derailed save for my stubborn tenacity and that of my midwife, I tried to go home immediately after the birth. They told me it was late and to just go home in the morning. Then I waited around all morning and just before noon they were trying to get me to stay another night just to get my son’s hearing screen done! This is something that can be scheduled, so basically they had NO BEDS for moms who needed them, but they were trying to get a perfectly healthy mother and baby to take up space in one of those beds that was needed. I wound up discharging myself, because I got tired of waiting and seriously, THERE WERE NO BEDS!

It saddens me that this hasn’t changed. Zoe actually needed and deserved to have a bed available, and a care team that listened to her. Sadly, nothing will change until we refuse to accept the low standard of care we are currently receiving. It’s clear that the Minister of Health and the Fraser Health Authority are not concerned enough, and likely won’t be until our collective voices echo that THIS IS NOT OKAY. I feel that there needs to be a push for more midwives and more access to home and out of hospital birth, such as birth houses like the one in Chilliwack, and birth centres such as the one that WOMB has been working steadily to bring to the lower mainland since before I first began my journey as a birth advocate in 2014. These options, made easily accessible to the majority of mothers who do NOT need medicalization of their births, could free up the system to help the mothers who DO need the specialized obstetric care. If this system was in place for lower risk mothers and the hospital had been less overwhelmed, perhaps Zoe might have had a bed and had her baby’s position recognized sooner. Perhaps efforts might have even been made to turn the baby and make her last months more comfortable.

Alas, we cannot undo the mistakes that shouldn’t have happened; we can only learn from them and advocate for ourselves, and hopefully this doesn’t happen to another mother in the future.