Limitations on support people, assurances that the hospital is the “safest place to birth”, restrictions and bans on home birth, and now this latest disgusting power play that was brought to my attention through my connections in the birth community. Behold, exhibit A, a letter to colleagues (NOT clients) telling care providers that the hospital will not be supporting any unmedicated birth. That they will “require” that every birthing person accept an epidural “just in case” they need a cesarean. Yes, you read that right. It’s the VBAC Tolerant rhetoric now being used to coerce EVERY birthing person to accept an unnecessary epidural “just in case” there’s a miniscule possibility that they need a cesarean.

In other words, they are assuming that every person who births at that facility will need a cesarean. These people who make up these stupid policies need to get out of birth! I’m serious here! If you have that little faith in the ability for us to birth our children vaginally without any intervention, then why the hell are you serving ALL pregnant people? These types of doctors (and they ARE all doctors, because midwives are the guardians and facilitators of physiological birth) make me see red. 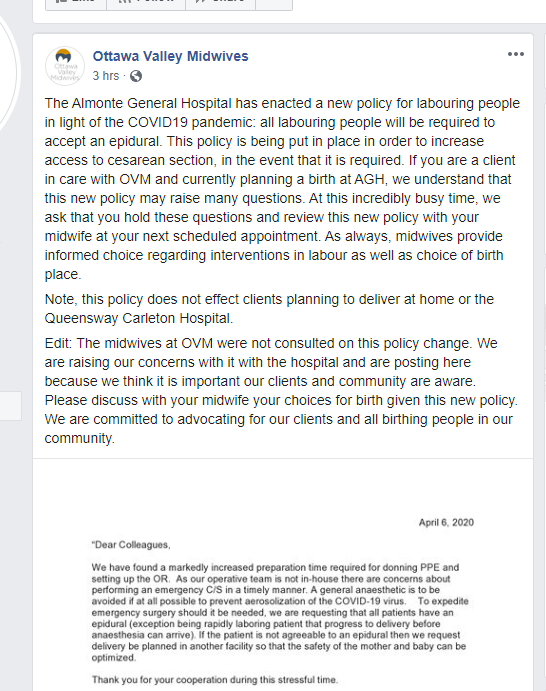 This was first brought to my attention via message to my facebook page. I followed the link to a post made by midwives in Ottawa. 3 hours after that post was made, and possibly less than 15 minutes after I read it, it was deleted. I am not naive;I have encountered the attempts to censor the outspoken midwives before. I can guess exactly what happened and why that post was deleted. The patriarchy doesn’t like it when the women-folk warn each other before rights have been completely erased. No doubt that those who are more willing to comply with the system for their own gains or protect their own hides from getting tanned will be telling their clients that an epidural is perfectly safe, with no side effects, and that really don’t these birthing people want to do what’s “best” for their babies? Cue my eye rolls!

Naturally, those of us who are alert in the world of birth advocacy already grabbed screen shots of the offending letter and the post by the midwives. Many of us had quite a lot to say. This particular post was written by the CEO and founder of BeBaby,  an amazing woman I have had the pleasure of connecting with over the past year:

I know that anyone who is passionate about birth, understands how birth works, and follows birth pages written by midwives, doulas, and advocates is already seeing the repercussions of this decision. The cesarean rate climbs ever higher, and now even those of us who avoid the epidural because we know we can birth without it are backed into a corner here.

I very much doubt that this is the only hospital that has considered this course of action. There will be plenty more letters, unless we make it clear that we won’t be bullied. Several birth advocates and birth warriors are taking action. We won’t let this get buried. We won’t forget and we won’t forgive. We definitely won’t be compliant nor will we stay quiet and let other people this directly affects find this out when they are at their most vulnerable.

There are those of us this decision by the hospital doesn’t apply to. Those of us who already choose to birth at home aren’t affected unless a ban on home birth has been imposed. But even so, some of us are prepared for that and will birth at home anyway. Those people are the free birthers. They have been criticized for their choices, but they see the writing on the wall and know that sometimes we have to do something so outside the cultural normative in order to protect our rights and our bodies from abuse and coercion. Sometimes, we have to take a look at what the system is telling us to do and do the complete opposite to show they don’t have as much power as they think they do.

But if free birth doesn’t feel right to you, there are other ways to make a statement and protect the vulnerable families who don’t know their rights and could be seriously harmed by this force of intervention where it is not needed. I don’t need to get into all the risks of an epidural, nor the risks of the interventions that may follow as a result of getting the epidural. It is up to US to decide whether those risks are something we are comfortable assuming, not the hospitals.

For one example, I am needle-phobic. The mere thought of getting a needle can send me into a severe anxiety attack. I feel hot, then cold, then my vision blurs. I feel sick to my stomach. I can’t breathe. If I am standing at the time I risk fainting. My heart races. This in itself causes me to carefully consider whether or not I need any needle procedure before I consent, and I have a list of things that need to happen in order for me to lessen the likelihood of having another anxiety attack during the needle.

I also do not do well with narcotics. I even feel sleepy after taking a Tylenol or Advil. I am very careful with any medications because of how they affect me. I know that morphine stays in my system longer than it’s supposed to, and that one shot at 8pm at night can keep me drowsy and out of it for 24 hours, gradually wearing off but still in my system. Same for anything given in an IV. So an epidural could keep me numb for longer than I would like.

Finally, there’s the issue of my back. I have chronic pain, that is genetic, and I see a chiropractor for it. She keeps me comfortable, but any aggravation to my back is a BAD thing. An epidural carries a risk of pain at the injection site and potential long-term pain in my back. As if I need more of that!

So in my case, an epidural would absolutely cause me great harm and therefore unless it was life or death I would never consent to getting one. There are likely others like me whom an epidural could cause harm.

This isn’t even taking into consideration the more typical risks of “failure to progress” followed by Pitocin use, followed by fetal distress, followed by an “emergency” cesarean. And then all the potential complications of surgery, or just the normal longer, more painful recovery of surgery and the difficulties in finding a care provider who will support a vaginal birth after cesarean.

So, if you are not directly affected by the actions of this hospital, you can email or call them and tell them how their ban on physiological, unmedicated birth would have affected your decision to birth in that facility and how unethical their actions are for birthing people who cannot birth elsewhere.

If you ARE affected by this decision, but are birthing somewhere else now because of it, call up the hospital and the doctors responsible for this “policy” and tell them that their actions have caused them to lose your business. You need to remember, the hospitals are still a business. They might be paid through the government taxes, but they are still getting paid for every client they receive. If people start leaving, they get less money.

If you are affected by this decision and cannot birth somewhere else, call the hospital and tell them that they are trying to FORCE you into accepting an intervention you do not need, nor want, and that in doing so they are also putting you at risk should you get that epidural under duress and it causes complications.

If you are affected by this decision, birthing at this facility, and want to avoid having to get the epidural, remember that YOU CAN REFUSE. They won’t like it, but they legally cannot force you. Labor at home, or even in the parking lot of the hospital for as long as you can, because an early epidural can stall labor but if you wait until the last possible minute to walk through those doors it may be “too late” to place one.

It’s far from ideal. Women and birthing people are absolutely being backed into a corner, but we CAN push back. We are not STUCK in that corner. They can do their best to tell us we are “not allowed” but we do NOT have to believe a word of it. There is always an alternative path. If a door is slammed shut and locked, look for the open window. We have a real opportunity to show those who think they can control how we birth that we can do without their rules. This is OUR war. We can assume the responsibility for our own choices and we can regain our power. It was always inside us. We can tap into that power now, stand firm, and not back down.

The system spent decades eroding our rights to birth until our cesarean and induction rates have climbed far too high and the birthing people are suffering the consequences while those who wish to maintain that system justify forced cesareans, coerced inductions, and a lack of informed consent or giving the option for the birthing person to safely decline. You can’t consent to anything if you don’t know that you can also say NO.

Let this hospital and any others that try to pull this stunt hear our NO. It’s time to take back control and remind them all that we will not lie on our backs and comply with their rules anymore. We do not NEED their rules to birth safely; we never did.